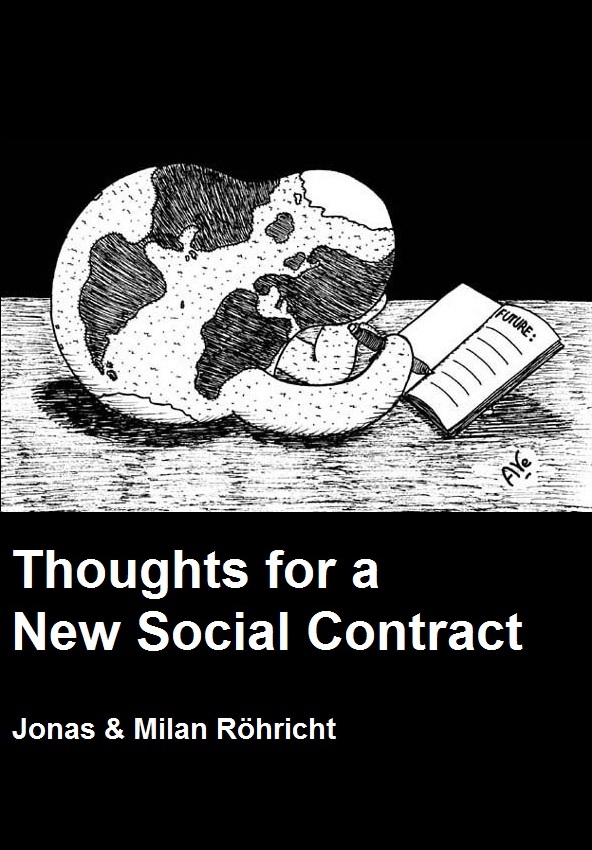 This is a project which Jonas and I worked on over the last few years, the first edition of which we completed last November.

The underlying idea is an expansion of the social contract developed in political philosophy, using it as a basis for solving many of the problems we have seen in the world we are growing up in.

Here is a chapter-by-chapter summary:

This is our introduction, the so-called ‘Opening thoughts’, in which we outline our fundamental proposal of a new social contract. From the start we try to convey our belief of a current political stalemate, using the extended metaphor of a ‘civil war’ in our society between the upper and lower classes. Within this chapter we also indicate what we will be discussing in the following chapters (these themes will shortly become clear within the respective chapter descriptions), as well as presenting John Rawls’ ‘difference principle’ – which we use as the underlying moral justification for the measures that we would like to see implemented. Near the end of this opening we also discuss the consequences which could lie in store if we fail to dramatically change the current state of inequality, using not just the extent of social divisions within South Africa but also the riots across wealthy European countries in recent years as examples.

Here we lay down various statistics conveying the current state of inequality, using the Gini coefficient and various other findings – most notably from Nicholas Saxon et al.’s contribution for Tax Justice Network; ‘Inequality: You don’t know the half of it’. Ultimately this chapter serves as a shocking beginning to portray from the onset why the need for redistribution in the context of a new social contract has arisen.

Chapter 3: What is a maximum socially acceptable annual income?

Before moving onto the broad issues of taxes, the economy and to some extent capitalism in chapter 4, this chapter serves as a pretext for these discussions by addressing the notion of incomes. We propose an agreement on and consequent formulation of a ‘maximum socially acceptable annual income’, whereby sums exceeding this point would be taxed at far higher levels than we are currently seeing. In this chapter we also discuss some systemic research into emotional well-being, citing in particular a study carried out by Daniel Kahneman and Angus Deaton that seems to find a ‘satiation point’ to the correlation of higher income and increased experienced well-being at $75,000/year. We also briefly discuss the findings of our own short online survey regarding the idea of introducing such a measure of a maximum acceptable income.

Chapter 4: Capitalism and the economy

In this chapter we thus move onto the economy and capitalism. We begin with the latter, presenting American sociologist Immanuel Wallerstein’s ‘universalist trio’ of factors that are quoted in support of capitalism and discussing the various shortcomings. We then move onto Acemoglu, Robinson and Verdier’s study ‘Can’t We All Be More like the Scandinavians? Asymmetric Growth and Institutions in an Interdependent World’, which seems to find that ‘cuddly’ capitalism such as the form found in Scandinavia is only possible when we have a more ‘cut-throat’ leader such as the US, which provides the means to push forward the technological frontier. Again we discuss, in detail, the shortcomings and counter-arguments, before moving on to Laffer curve theory and then giving concrete examples of how new tax rates could be applied. Here, we focus in detail on the different forms of changes in behaviour that are seen when tax rates increase; primarily tax avoidance and decreased incentives to work and reinvest. We present our ideas and solutions to these problems, quoting frequently from Joseph E. Stiglitz; a key member and economic advisor of the Clinton administration.

We introduce James Henry’s report for Tax Justice Network, ‘The Price of Offshore Revisited’, which estimates the global offshore financial wealth that was out of reach to governments worldwide as of the end of 2010 to be anywhere between $21-32 trillion (~ €16-24 trillion). We propose measures which we would like to see introduced with regards to individual income tax and corporation tax, as well as explaining the process of transfer mispricing and highlighting the lethargy of current governments in finding measures to abolish the problem.

Here we focus in detail on the new roles and responsibilities of the lower-income spectrum under a new social contract. We describe three main reasons for introducing the principle of no benefit without return responsibility. For one, to increase the well-being of benefit claimants by, among others, overcoming the well-established association between low employment status and low self-esteem. For another, for the advantages which society stands to gain from the extra contributions being made. And, thirdly, because the nature of the reconciliatory process requires everyone to make a contribution. We continue by discussing the traditional counter-arguments by the left, as well as existing forms of benefits and any return responsibilities for these, focusing on both the successes and shortcomings. We then move on to our propositions as to how such a system could work, distinguishing between qualified and unqualified benefit receivers and comparing our ideas to the German ‘Zivildienst’ (Civil service); a compulsory, paid, community service as an alternative to military service. We are careful to stress that return responsibility would be coupled with an increase in benefits to an acceptable minimum wage, and that persons unable to contribute due to ill health, for example, are exempt from this responsibility.

Chapter 7: Where to invest under a new social contract

Having raised a considerable surplus through higher taxation and cracking down on tax avoidance, we discuss how this money should best be spent, recalling John Rawls’ difference principle and finding measures in which it could best be fulfilled.

Leading on from the discussion in chapter 6, we discuss how such changes become complicated when children are involved, and therefore how money could be spent to protect children from any harm. As the basis for this discussion we use varying ideas from two professionals in key roles in the community; a member of the UK charity ‘Action for Children’, based mostly in the London Borough of Hackney, as well as the Headteacher of a school in Neuköln, Berlin; a deprived area of the German capital.

Here we present our beliefs about how the education system could best be modified in order to help fulfil the difference principle. We cover early, primary, secondary and tertiary education, using data from the OECD ‘Pisa’ study; explaining the Perry Preschool study; and quoting from German journalist Felix Berth’s book ‘Die Verschwendung der Kindheit’, amongst others. We introduce the concept of positive discrimination, which seeks to improve funding for schools in underpriviledged areas, and reject the concept of a system of different high school ‘tracks’, which is inadequate with regards to fulfilling the difference principle. We also compare funding for higher education in different countries, arguing for low cost or completely free university access, as well as discussing apprenticeships and the differences in expenditure for education in various countries.

We focus on the three most widely used healthcare models that have any reasonable claim to merit, be it of an economic or philosophical nature: market-oriented, Bismarck and Beveridge. We use the US, Germany and the UK as an example for each model respectively. We explain the various advantages and shortcomings, discarding of the market-oriented model due to its high cost and its failure in fulfilling the difference principle. We then discuss the advantages of the Beveridge model over the Bismarck model, quoting from Michael Sandel in his recent book ‘What Money Can’t Buy – The Moral Limits of Markets’.

Here we discuss a fundamental flaw within capitalist meritocracy; that it rewards most highly those professions which seek only to accumulate more and more capital for its own sake. We explain our belief that it is thus vital to use a substantial part of the surplus of funds which would have been created through the measures discussed in earlier chapters to reward more highly other jobs; especially those of high social value.

We briefly discuss the necessity of introducing a minimum wage.

Split into three parts, this chapter (along with chapter 9) discusses how we can begin to break the sphere of influence between those power and those with money. We talk about the need for a fundamental reform in which the game of politics is played, focusing on following issues:

I. Is there an ideal voting system?

Beginning with a definition of the word ‘democracy’, we highlight ways in which many of our current ‘democracies’ have failed, and continue to do so, in living up to the founding principles of which this word stems. After discussing the problems of many of the electoral systems in use today, we offer a solution: the ‘Two-Round-System’ in use, for example, in France’s Presidential elections. We thus outline this system before superimposing it onto the previously identified problems, which then seem to be largely solved. We then continue by discussing the difference between a direct and an indirect democracy, praising Switzerland for its use of a direct democracy and calling for this to be adopted worldwide. Having outlined this, we thus return to the initial problems once again and argue that, once a 2RS is coupled with a direct democracy, the problems have been solved as best as possible.

In this part of the chapter we focus on the need to shift away from personality battles between the varying politicians. We claim that often voters seem to place more emphasis on superficial, electorally favourable qualities (oratory skills, good-looks, a nice smile etc.) than on the policies they are representing. We return to Kahneman for back up to this point, discussing what he calls the ‘Halo effect’. We then propose varying ideas for reform, beginning with a ban on ‘cheap’ advertising, i.e. without clear political content, and encompassing measures such as capping how much may be spent and the introduction of an unbiased, policy-focused booklet in which candidates may present the policies they stand for.

III. The irrelevance of election promises

In the final part of this chapter we move onto election promises, and the corrupting effect of voting for a candidate on the premise of a promise only for this to be abandoned, indeed reversed. We give varying examples from recent times of this phenomenon, and propose the need for a popularity deterrent in preventing promises being made than aren’t, or can’t, be kept.

We begin with a definition of lobbyism and stress its significance as a vital democratic tool, before moving on to the problems that lobbyism has caused. We portray the mechanisms that are used to corrupt the course of politics by means of an extensive account of the successful effort over the last decade to sew doubt amongst the public over the issue of climate change. We also describe the equally successful attempt by the German auto industry to influence the government into blocking EU legislation about stricter emission standards in October 2013. We finish by offering solutions, presenting ideas by Karl Lauterbach of the German SPD and Carl Schlyter, Swedish Member of the European Parliament.

Here we sum up our demands and introduce two further issues in the fight for justice; the preservation of our planet and redistribution of wealth not just within our first world societies, but all over the world.